The 2014 Paul P. Weinstein Memorial Lecture presented by the Eck Institute for Global Health featured alumnus Bernard Nahlen, ’75, MD, Deputy Coordinator of the President's Malaria Initiative for USAID of the Bureau of Global Health, Infectious Diseases and Nutrition. Nahlen graduated from Notre Dame in 1975 with a Bachelor of Arts degree, majoring in American Studies.  He went on to receive a medical degree from the University of Arkansas in Little Rock.

Nahlen is part of the University of Notre Dame’s deep and rich tradition of research and training programs focused on reducing the burden of tropical infectious diseases around the globe. In honor of that tradition, the Eck Institute for Global Health established the Paul P. Weinstein Memorial Lecture to recognize the excellence that Weinstein brought to a life dedicated to advancing research on infectious diseases and training multiple generations of scientists.  The 2014 Memorial Lecture featuring Nahlen carried on this tradition.

In 1946, as a captain in the U.S. Public Health Service, Weinstein played a significant role in the establishment of the Communicable Diseases Center, which eventually became the Centers for Disease Control and Prevention. He spent the next 20 years at the National Institutes of Health, where he retired in 1968 as the Director of the Laboratory of Parasitic Diseases. Weinstein, a leading authority on parasitology, vector biology, and public health, then joined the Department of Biological Sciences at the University of Notre Dame as Professor and Department Chair. For more than 21 years he was an exceptional researcher, teacher, and mentor. Reflecting his passion for research, he continued working and publishing after his retirement from teaching in 1990 until his death in 2008.

The career of Dr. Bernard Nahlen most fittingly reflects and embodies the ideals and achievements of Weinstein. Both men were heavily involved in the prestigious American Society for Tropical Medicine and Hygiene and, similarly, devoted much of their research to a better understanding of the parasites that cause human suffering and death from vector-borne diseases that have plagued man since the dawn of time.

Nahlen delivered a powerful lecture to a full auditorium. Frank Collins, PhD, George and Winifred Clark Professor of Biological Sciences and member of the Eck Institute for Global Health said in his introductory remarks, “Nahlen is a global leader dedicated to addressing malaria. In addition to this achievement, he also remains a major contributor to HIV research and still produces papers on the subject.”

Nahlen’s lecture focused on the global effort toward malaria elimination and pointed out that, “disease elimination is not just about science but also making policy decisions.” He presented the importance of addressing policy as the next step of global leadership in elimination. He outlined that the consideration of the health burden, economic burden, and health systems burden of disease all need to be part of the effort and plan going forward.

In 1983, Nahlen completed a residency in Family Practice at the University of California, San Francisco, before joining the U.S. Centers for Disease Control and Prevention (HHS/CDC) in 1986 as an Epidemic Intelligence Service Officer.   In 1989, he completed a second residency in Preventive Medicine and later served as Deputy Director of the Los Angeles County AIDS Epidemiology Program.  Dr. Nahlen’s commitment to malaria prevention and control subsequently took him to Kenya in 1992 as Director of the CDC field research station in collaboration with the Kenya Medical Research Institute (KEMRI).  In 2000, he served as Senior Technical Advisor to the WHO Malaria Programme. At the WHO, he led the Monitoring and Evaluation team as well as the Malaria in Pregnancy team. He served as the first chair of the Roll Back Malaria Monitoring and Evaluation Reference Group.   From 2005-2006, Dr. Nahlen was Senior Advisor in the Performance Evaluation and Policy unit of the Global Fund to Fight AIDS, Tuberculosis and Malaria. Dr. Nahlen has authored or co-authored more than 150 articles related to malaria prevention and control.

Starting about 50 years ago, international campaigns to eradicate malaria have made substantial progress in many areas, mainly outside Africa, which was largely excluded from this “global” strategy.  Despite initial success, with the emergence and spread of chloroquine-resistant Plasmodium falciparum parasites and DDT-resistant Anopheles mosquitoes, political and financial commitments soon began to wane.  Sadly, this resulted in a global resurgence of malaria, including in areas where it had been eliminated.  In October of 2007, Bill and Melinda Gates issued a renewed call for complete eradication to be adopted as the long-term global goal in the fight against malaria, a vision that was immediately echoed by the World Health Organization.  Recent successes in reducing malaria morbidity and mortality in Africa and progress in development of new tools have provided new impetus for this vision.  Nahlen stated that the most effective control programs deliver a combination of tools and that the efficacy of the current tools will continue to be challenged by changes in the parasite and the mosquito. Therefore, while it will be possible to eliminate malaria from many areas with the tools available now, major investments in research to improve existing tools and delivery strategies and to develop new tools will be required to eradicate malaria.  To achieve this ambitious goal, global policy change must be part of the formula. 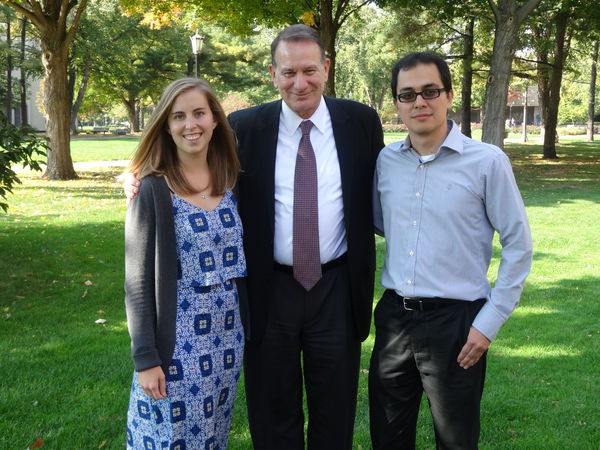 Pictured with Dr. Nahlen are the winners of an internal competition among all Notre Dame students and post docs going to the American Society for Tropical Medicine and Hygiene November 2-4, 2014, in New Orleans, LA.  In lieu of receiving a speaking honorarium from the University, Nahlen suggested the funds be used by the Eck Institute for Global Health to support two students who will be presenting posters on malaria research. These funds will allow them to attend this premeire global conference in their future field.  Thank you to our generous guest for paying it forward for the future of malaria research!

Gwyneth Sullivan is a Master of Science in Global Health student in the laboratory of Zainulabeuddin Syed, PhD. Her research abstract is titled: Oviposition signals and their neuroethological correlates in Culex spp. Complex.