The University of Notre Dame has a long and rich tradition of research and training programs focused on reducing the burden of tropical infectious diseases around the globe. In honor of that tradition, the University established the George B. Craig, Jr. Memorial Lecture in 1996. The lecture series is hosted by the Eck Institute for Global Health and recognizes one of Notre Dame’s most distinguished professors and his global contributions to infectious tropical diseases and science both at the University and around the world. The 2013 Memorial Lecture was presented on Wednesday afternoon by one of Craig’s postdoctoral residents in training Edward D. Walker, PhD, who holds academic appointments in the Department of Entomology and the Department of Microbiology and Molecular Genetics at Michigan State University (MSU).

Walker delivered a power packed lecture titled Toward Malaria Elimination: Precedents, Antecedents, and Processes to a full auditorium in Galvin Life Sciences Center which focused mostly on aspects of his research on malaria and mosquito control. “We still have Anopheles mosquitoes in the United States,” says Walker. “But what happened to the malaria parasite?” Walker has devoted his career to studying both the mosquito and the history of disease making note of man-made and natural reasons why malaria has disappeared in the US. He has tracked the effects of mans efforts to control the environment through agricultural industry. He focused on the historic relevance of co-contributions of the late great D.L. Van Dine, an entomologist who, in 1914, worked with L.O. Howard from the USDA to convince the US Department of Agriculture to direct funds toward malaria eradication. This early campaign, including use of screens in households in Louisiana, helped the early intervention efforts in the first half of the 20th Century as much as, if not more than, use of DDT in the second half of the 20th Century. Walker drew many parallels to the early work of Van Dine and that of his mentor, George Craig, both in their philosophical beliefs and crafty execution of eradication techniques.

“It is an honor to be able to bring alumni back to campus that are products of the University and global leaders in their field,” says Gregory Crawford, dean of the College of Science at Notre Dame. “Not only is this an opportunity for our faculty to have direct access to fellow researchers but it gives us an opportunity to forge new research partnerships going forward.”

The George B. Craig, Jr. Memorial Lecture brings to campus former students of Craig who was one of Notre Dames most revered and distinguished faculty members.  A Chicago native, Craig joined the Notre Dame Biology faculty in 1957 after receiving a Bachelor’s degree from Indiana University and Master’s and PhD degrees from the University of Illinois.  While at Notre Dame, he established a world-renowned research program in mosquito biology and genetics known as the Vector Biology Laboratory, serving as advisor to 40 graduate students and 39 postdoctoral fellows, with whom he published more than 500 scientific papers.  He was a passionate teacher and mentor to countless undergraduate students. Recipient of numerous awards and honors during his career at Notre Dame, he was honored by the Entomological Society of America in 1975 with its first Distinguished Teaching Award, received the Hoogstral Medal from the American Committee for Medical Entomology, and, in 1983, became the first Notre Dame and still only faculty member to be elected to the prestigious National Academy of Sciences.  Craig’s work is legendary and this lectureship is a testament to his life long investment in his students. This lectureship is funded, in part, by an endowment established from contributions donated in his memory. 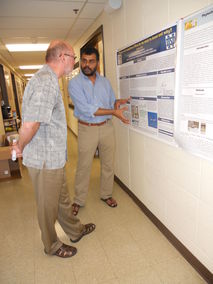 Walker joined the MSU faculty in 1990, following a 3-year postdoctoral position with Dr. Richard W. Merritt.  His education and training include BS and MS degrees in zoology from Ohio University (advisor: Dr. William S. Romoser), Ph.D. in medical entomology from the University of Massachusetts (advisor: Dr. John D. Edman), and postdoctoral training in vector biology at the University of Notre Dame with Dr. George B. Craig, Jr.  His areas of scholarship and research include the study of insect vectors of disease, the ecology and epidemiology of vector borne diseases, and means to control them.  He has been researching the landscape ecology of malaria vectors and resiliency of the malaria transmission system in western Kenya since 1999.  He also conducts research on mosquito-microbe interactions in larval and adult stages; the urban ecological context of West Nile virus transmission in the upper Midwestern United States; and invasion and spread of tick-borne diseases.  New research in Malawi, under an International Center for Excellence in Malaria Research project, focuses on agricultural landscape transformation, irrigation and malaria transmission; and peri-urban malaria.  He is married and has two daughters.

PHOTO caption: Walker greatly appreciated his chance to meet with and talk to Notre Dame students and faculty especially junior faculty members from the Eck Institute for Global Health like Zain Syed.