Matthew Eng, a doctoral student in the laboratory of University of Notre Dame’s Professor of Biological Sciences David Severson and Director of the Eck Institute for Global Health, is the recipient of a Grants-in-aid-of-research (GIAR) given by the Sigma Xi Research Society. His grant titled, “Deciphering host factors for dengue infection in Aedes aegypti mosquito,” was funded as one of only 17% of applicants. Dengue is the most common mosquito-borne viral disease in the world, with no available vaccines or drug treatments. Mosquito control remains the primary disease control mechanism. 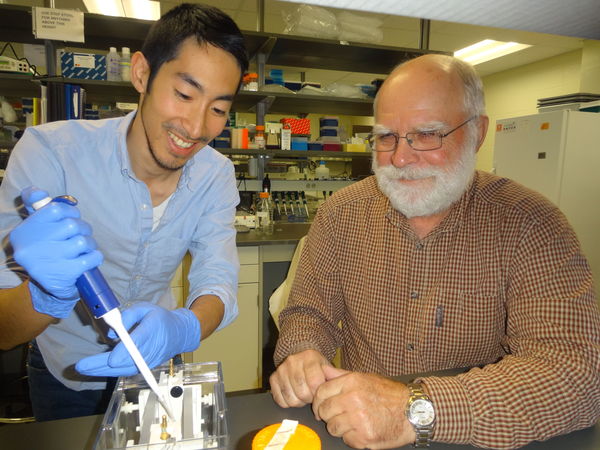 Eng states, “I was lucky enough to have received the funding and am excited to start unraveling the reasons for why certain mosquitoes are better vectors for dengue than others.” Previous studies in the Severson Lab have shown that a group of genes in the mosquito Aedes aegypti associated with cell death were upregulated in a dengue resistant mosquito strain. As part of the Severson Lab, Eng took on the challenge of determining the exact roles these genes play in preventing infection by the virus.

Severson noted that, “as it often happens in science, when he knocked down expression of a caspase gene known to be critical to the cell death response, to our surprise the infection rate by the virus actually went down instead of the anticipated increase.”  Since then, Eng’s research has focused on his finding that this caspase gene also impacts autophagy, a recycling mechanism in cells; it appears that dengue virus may depend on activation of autophagy to successfully infect mosquito cells.  Eng has made excellent progress and the Sigma Xi funding will facilitate these efforts.