The largest outbreak of the Ebola virus in history currently occurring in West Africa has raised fears that the disease may soon spread to the United States. However, a University of Notre Dame researcher who studies the virus believes that, while there are grounds for concern, there is no need to panic. 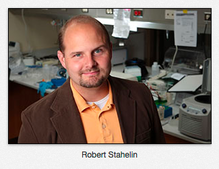 Robert Stahelin, an adjunct associate professor of chemistry and biochemistry at the University and an associate professor at the Indiana University School of Medicine-South Bend, as well as a member of Notre Dame’s Eck Institute for Global Health, acknowledges that in an increasingly interconnected world, the virus is a plane ride away from the U.S.

“However, there are very effective screening programs in place at our airports that make it unlikely that Ebola could enter the United States undetected,” he says.

Stahelin also points out that the rate of fatalities from the Ebola virus is declining.

“The rate is much lower than before, on the order of 60 to 62 percent, versus 90 percent when the virus first emerged,” he says.

He notes that a research study involving primates that was published two weeks ago confirmed what scientists had long suspected: that Ebola is transmitted by direct contact with bodily fluids and not by airborne means.

There is currently no vaccine or therapeutics for those infected with the Ebola virus. Stahelin’s research is aimed at the identification of drugs that can combat the virus. His work uncovered how the most abundant protein that composes the Ebola virus, VP40, leaves the host cells and spreads the infection to other cells in the body.

“My laboratory’s work aims to progress our understanding of the mechanisms by which reversible binding of human and viral proteins to different cell membranes is mediated and regulated, with an emphasis on how viral and human proteins assemble on cellular membranes,” Stahelin says. “The long-term objective of this research is to apply principles learned from biochemical and biophysical studies to the generation of novel therapeutics to combat cancer and infectious diseases such as Ebola and HIV.”