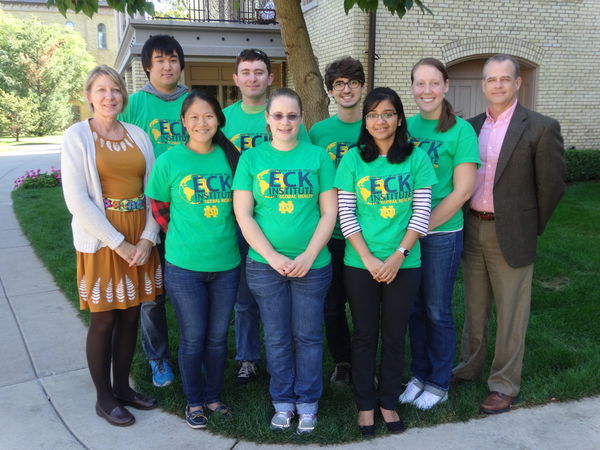 The Institute has established a graduate student fellowship program to support students enrolled in the University of Notre Dame’s PhD program. Outstanding graduate students from across the University of Notre Dame and those in association with the Indiana University School of Medicine – South Bend whose research is directed to questions that impact global health are eligible every year. The fellowship provides one year of financial support in the form of an annual stipend and health insurance during the student’s third, fourth, or fifth year. Students may renew their fellowship for an additional year, with two years being the maximum period of the fellowship.

The five new awardees, their faculty advisors and research topics for 2015-16 are:

Katrina Button-Simons, Department of Biological Sciences. Faculty Advisor: Michael Ferdig – to develop an unbiased, high-throughput method for predicted mechanism of action for candidate anti-malarial drugs. This is particularly important because of the developing resistance to artemisinin, the last line treatment for multi-drug resistant malaria. In certain areas of Southeast Asia, Plasmodium falciparum is becoming very difficult to treat with very high treatment failure rates. Worldwide spread of artemisinin resistance would leave a void in effective treatment for multi-drug resistant malaria and with no new anti-malarials ready for use, this would lead to large increases in malaria mortality. Thousands of compounds have been identified with anti-malarial activity, but a high-throughput method for prioritizing these compounds based on target is urgently needed.

Olivia Choudhury, Department of Computer Science and Engineering. Faculty Advisor: Scott Emrich – research goals are threefold: bringing bioinformatics to non-model and sequence-based domains by using linkage maps, efficient analysis of RAD-seq data of heterozygous non-model species, and accuracy improvement of Single Molecule Sequencing reads. She bases her work on team science and focuses on problems with broad impact outside of the algorithms, methods, and tools development. Her strength is in her ability to work within and between disciplinary groups. She continues to seek out collaborative efforts that connect traditional fields of computing and statistics with life scientists.

Choudhury received a Bachelor’s of Technology in Computer Science and Engineering from West Bengal University of Technology, India, in 2011.

Sage Davis, Department of Biological Sciences Faculty Advisor: Michael Ferdig - will address ART- R isolates from Southeast Asia and study the relationships between drug resistence and transcription. Davis hypothesizes that K13 has lost its ability to degrade a histone deacetylase and that changes in the regulons of K13 and the histone deacetylase will expose functional shifts in these genes. Also, that these biological changes can be predicted, prior to establishment of ART-R, using parasites sensitive to ART (ART-S) that are experimentally perturbed with the drug. Finally, utilizing what changed biology of the ART-R parasites, Davis will predict and validate novel drugs effective against these isolates. This project will address artemisinin resistance by malaria parasites most specifically in Southeast Asia where a real- time crisis in malaria control is on the horizon due to drug resistance.

Davis received a Bachelor of Science in Bioengineering/Pre-medical from the University of California, San Diego in 2013.

Trevor Kane, Department of Biological Sciences. Faculty Advisor: Shaun Lee – to embark on a new project in the Lee lab examining a potential virulence factor produced by Staphyloccus aureus. Staphylococcus aureus harbors manifold virulence factors, including adhesins, proteases, lipases, secreted toxins, and antigenic polysaccharides. Recent bioinformatic studies have revealed that select human isolates of S. aureus possess genes that resemble those required for the production of a toxin resembling Streptolysin S, a powerful cytolysin and major virulence factor of Group A Streptococcus. Pervious findings have shown that this gene cluster is highly conserved and also present in the important human pathogens Clostridium botulinum and Listeria monocytogenes. Therefore it is likely that the presence of this Streptolysin S-like gene cluster in S. aureus represents a significant pathogenic mechanism.

Kane received a Bachelor of Science in Molecular and Cellular Biology from the University of Puget Sound in 2010.

Enrico Speri, Department of Chemistry and Biochemistry. Faculty Advisor: Shahriar Mobashery – will study the elucidation of the machinery of the BlaR1 protein in inducible resistance to β-lactam antibiotics. The BlaR1 protein recognizes the presence of antibiotics in the system at its surface domain, we have discovered that this leads to its phosphorylation (at a serine and at a tyrosine) in the cytoplasmic domain by one or more known protein kinase: Stk1, SA007, Cap5B1, Cap5B2 and RsbW. We believe that this is the activation mechanism for the cytoplasmic domain. Meanwhile the activated zinc protease is responsible for the cleavage of the repressor BlaI (or MecI in the mec operon), leading to upregulation of expression of the bla operon, responsible or the resistance response (production of BlaZ, a class A β-lactamase). It is understood that activation of the MecR1, which lead to the final production of PBP2a (another antibiotic resistance enyme), is by the same mechanism.

Speri received a Bachelor of Science in Pharmaceutical Chemistry and Technology from the University of Modena and Reggio Emilia, Italy in 2012.

Current Eck Institute for Global Health Fellows who have been awarded a second year:

Brianna (Norris) Mullins, Department of Biological Sciences. Faculty Advisor: Miguel Morales – will research a better understanding of the role played by Ser/Thr protein phosphatase 5 (PP5) in cell growth, virulence, complex formation and signaling pathways in L. major and L. donovani parasites. Protozoan parasites of the genus Leishmania cause a wide variety of vector-borne diseases, each initiating significant health complications. Understanding signaling events in this protozoa parasite will lead to important insights on the virulence, pathogenesis, stress response and will provide the first stage to validate some of these enzymes as drug targets. This novel line of research will make an impact in Leishmania and Global Health.

Mullins received her Bachelor of Science and Masters of Science both from Western Illinois University in 2011 and 2012 respectively. Mullins anticipates receiving her PhD in May of 2017.

Michelle Ngai, Department of Biological Sciences. Faculty Advisor: Mary Ann McDowell - addresses one angle of the re-emergence of vector-borne diseases - the growing incidence of insecticide resistance. Ngai will characterize the serotonin receptors in mosquitoes, Aedes aegypti and Anopheles gambiae, to identify an alternative mode of action for future insecticides. She will look at the expression profiles of the receptors, and through in vitro and in vivo assays, determine plausible chemical candidates for insecticide development owing to their ability to alter receptor activity and ultimately, mosquito behavior.

Ngai received her Bachelor’s of Science in 2008 from McGill University with a degree in Physiology and her Masters in Public Health from Imperial College in 2010. Ngai anticipates receiving her PhD in the Spring of 2016.

For more information contact the office or visit: https://globalhealth.nd.edu/service/graduate-student-fellowships/