The U.S. role in global health is multifaceted. The U.S. government provides financial and other health-related development assistance to low and middle-income countries; operates programs and delivers health services; provides technical assistance and other capacity-building support; participates in major international health organizations through global health diplomacy and other efforts; conducts research; supports international responses to disasters and other emergencies; and partners with governments, non-governmental groups, and the private sector. The University of Notre Dame has a long and rich history of research and training in tropical infectious diseases and continues to be a key academic partner with the U.S government in addressing global health challenges.

Admiral Tim Ziemer will join Bernard Nahlen, Director of the Eck Institute for Global Health, in a discussion about The Importance of U.S. Leadership in Global Health on Wednesday, April 24 at 4:00pm in Washington Hall. A reception will follow in Hurley Hall for grad students, faculty, and staff.
This event is free and open to the public. 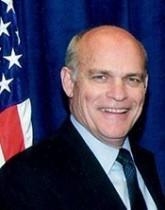 Bio: Admiral Tim Ziemer is the Acting Assistant Administrator for the Bureau for Democracy, Conflict, and Humanitarian Assistance (DCHA) at USAID.  From April 2017 to July 2018, Ziemer was appointed by President Trump to be the Senior Director for Global Health Security and Biodefense at the National Security Council. Ziemer is on his second appointment at USAID. In June 2006, Ziemer was nominated by President Bush to lead the President’s Malaria Initiative (PMI). The PMI is a historic initiative to control malaria in Africa and is a collaborative U.S. Government effort led by USAID in conjunction with the Department of Health and Human Services (Centers for Disease Control and Prevention), the Department of State, the White House, among others. Admiral Ziemer was Executive Director of World Relief, an organization that provides disaster response, community development, child and maternal health, HIV/AIDS, agricultural assistance, and microcredit programs in over 30 countries.
Ziemer completed a 30 year career in the U.S. Navy as a naval aviator and commanded several squadrons, air wings and naval stations. He also commanded the Mid-Atlantic Region. During his service, he served as Deputy Director for Operations on the Joint Staff and was responsible for planning and response for crisis operations at the National Military Command Center.
Admiral Ziemer was born in Sioux City, Iowa, and raised in Asia, the son of missionary parents serving in Vietnam. After college, he joined the Navy, completed flight school, and returned to Vietnam during the war where he flew 550 combat sorties in support of the Navy Seals and riverine forces.
Ziemer holds a degree in History from Wheaton College in Illinois, an honorary Doctor of Humanities from Georgetown University, and served as a Senior Fellow at the Naval War College National Security Strategic Studies Group.