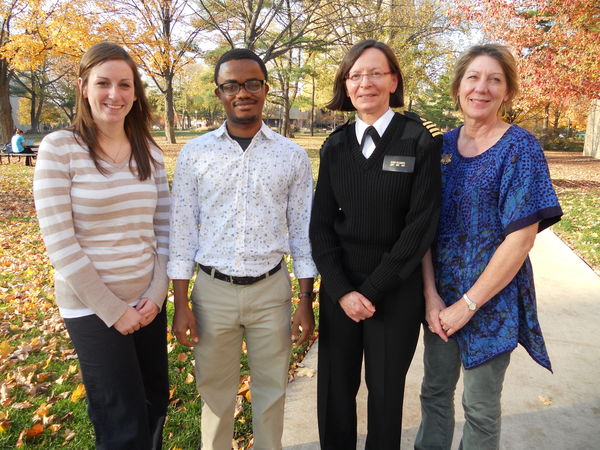 On Wednesday, October 24, 2012, Eileen Franke Villasante, PhD, CAPT MSC USN, who currently serves as Head of the Malaria Department at the Naval Medical Research Center in Silver Spring, Maryland, gave the Eck Institute for Global Health Colloquium lecture in the very same auditorium where she sat as a student.

The once ND student had not been back to campus in, “too many years to count,” according to Villasante. Captain Villasante studied in the laboratory of parasitologist Paul Weinstein, PhD, earning her Doctor of Philosophy (PhD) degree in biology from the University of Notre Dame in 1982. A native of Long Island, New York, Villasante earned her Bachelor of Science degree from the State University of New York at Albany in 1978.

Upon receiving her PhD from the University of Notre Dame, she began a quest to see the world while doing research. She never imagined one day she would conduct laboratory and field-based research on malaria, leishmaniasis, and filariasis in places like Indonesia, Peru, and Egypt.  This international career was in parallel to her distinguished rise in the ranks of the Navy, holding a variety of leadership positions over the years.

Villasante went to the National Research Council as a postdoctoral fellow in the Leishmaniasis Laboratory as part of the Division of Experimental Therapeutics at the Walter Reed Army Institute of Research. She discovered the US Navy where they advertised, “It’s not just a Job, it’s an Adventure.” She was at Walter Reed for two years prior to being commissioned as an officer in the United States Navy in 1984. Not knowing that adventure would be the career of a lifetime, she signed-up and has traveled to the deepest pockets of the world researching infectious diseases.

Over her career, Villasante has held several leadership positions in the Navy including Scientific Director at the Navy’s medical research laboratory in Egypt, Special Assistant to the Navy Surgeon General for Research Protections, Executive Officer of the Naval Medical Research Center, and, currently, Head of the Malaria Department at the Naval Medical Research Center. The Navy Malaria Department concentrates on developing a vaccine for the malaria parasite. She is often asked why would the Navy or any of the armed forces be interested in infectious disease? Her answer is easy: protection for the troops. For example, in 2011 there were 124 cases of malaria, mostly in Afghanistan.  Infectious diseases have a direct impact on our military and their ability to carry out their mission.

Currently, there are 51 microbiologists serving the Navy in active duty around the world including five laboratories in the US: Maryland, California, Texas, Ohio, and Connecticut each with a unique area of speciality. The global labs also have areas of concentration specific to the infectious disease found in that area and function in coordination with here local Ministries of Health, academies, and sometimes, active non-governmental organizations.

Villasante has been an integral part of the success of the Navy’s medical corps and long history of success in infectious disease research. Their new slogan is a testament to her life’s mission: “America’s Navy: A Global Force for Good.” Therefore, delivering a lecture on Navy careers to young scientists in the same auditorium where she attended lectures as a student was more than a coming home but a completion of her educational circle.