While the Caribbean braces itself and addresses the rapid emergence and spread of the chikungunya virus, Notre Dame scientists and alumni in the field continue their monitoring, tracking, and planning for this crippling disease to potentially hit the US. This week, as cited in the Miami Herald, alumnus Roger Nasci, Centers for Disease Control and Prevention, stated, “There’s a high likelihood, as we continue to monitor and investigate, that we will find some.” Nasci, an expert in vector-borne diseases at the CDC, held a post doctoral position in the laboratory of entomologist George B. Craig, Jr. at Notre Dame early in his career. Craig, was a global authority on mosquitoes and the diseases they carry, founding the Vector Biology Laboratory which later expanded into what is now the Eck Institute for Global Health. 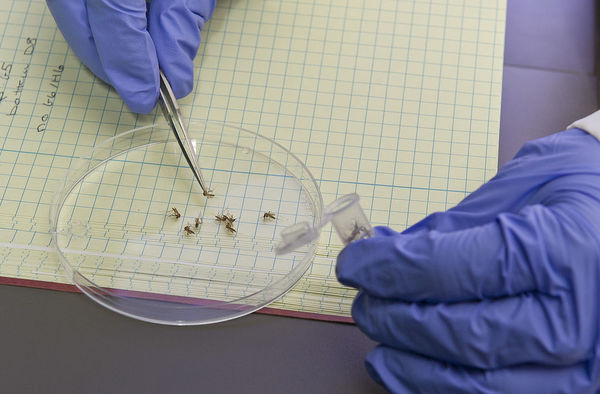 David Severson, Professor of Biological Sciences and Director of the Eck Institute for Global Health, whose primary research field site is in Trinidad, is watching the quick spread very closely.  “Yes, it has rapidly spread throughout the Caribbean,” states Severson, “but it hasn’t made it to Trinidad yet. I said yet as public officials there are expecting an outbreak.” Severson’s research specialty is with the two primary mosquito vectors for chikungunya virus, Aedes aegypti and Aedes albopictus. “The conditions are ripe for entry into to the US via Florida, likely via a traveler from one of the islands. Aedes aegypti is the major vector in the tropics, but Aedes albopictus, introduced into the US in the late 1980’s in used tire shipments, is more adapted to our temperate climate and is established throughout the southeastern US with populations as far north as Indianapolis.” Severson further states, “The virus will be here before you know it.”

Chikungunya is rarely fatal, but does cause high fever, headaches, chills, and debilitating joint pain.  Alumnus Dr. Vincent DeGennaro, Jr., ’02, is working in Haiti and addressing the disease on the ground as it spreads at an alarming rate. Unlike some of the other vector-borne diseases such as malaria and lymphatic filariasis where universal WHO precautions and health standards help prevent transmission, in Haiti chikungunya is spreading equally to expatriates and Haitians alike due to the poor infrastructure, including poor sanitation that promotes mosquito breeding and lack of simple things like window screens that prevent mosquito entry. DeGennaro recently submitted his account to the Notre Dame Magazine.