Making progress researching a deadly virus is no small feat. Doctoral candidate and Eck Institute for Global Health Fellow Emmanuel Adu-Gyamfi has become the champion of the disease.  He is the lead author of another recent article published on the Ebola virus. Working under the mentorship of Eck Institute for Global Health member and Associate Professor of Biochemistry and Molecular Biology, Robert Stahelin, PhD, from the Indiana University School of Medicine-South Bend, and in association with others from the University of California at Irvine’s Department of Biomedical Engineering, Adu-Gyamfi’s article was highlighted online in Physics Today.  It will also appear in the December print issue. 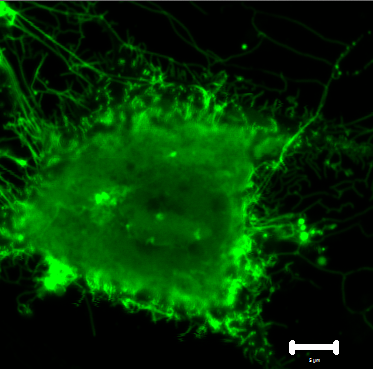 Ebola is most commonly found on the continent of Africa. There are no current vaccines or approved therapeutics available for any of the five strains of Ebola. The strain Zaire is the most common and, unfortunately, the most deadly with mortality rates as high as 90% within days of contraction. The international vaccine community targets the Zaire and Sudan strains, while the Stahelin lab narrows their research specifically to Zaire.

According to the article, “The assembly and budding of VP40 from the plasma membrane of host cells seem still poorly understood. We investigated the assembly and egress of the VP40 protein at the plasma membrane of human cells using single-particle tracking and several other robust cellular imaging techniques.  Our results demonstrate that actin, an abundant protein found in all eukaryotic cells and one of three major components of the cellular cytoskeleton, coordinates the movement and assembly of Ebola VP40.  This is a critical step in viral egress and additionally these findings underscore the ability of single-molecule techniques to investigate the interplay of virus and host proteins in viral replication.”

In addition to being a member of the Eck Institute for Global Health and Associate Professor of Biochemistry and Molecular Biology, Robert Stahelin, PhD, is an adjunct Associate  Professor of Chemistry and Biochemistry at the University of Notre Dame and a member of the Center for Rare and Neglected Diseases. Stahelin’s research and teaching encompass working toward advancements in vaccine and therapeutic developments. “My laboratory’s work aims to progress our understanding of the mechanisms by which reversible binding of human and viral proteins to different cell membranes is mediated and regulated, with an emphasis on how viral and human proteins assemble on cellular membranes.” Stahelin states, “The long-term objective of this research is to apply principles learned from biochemical and biophysical studies to the generation of novel therapeutics to combat cancer and infections diseases such as Ebola and HIV.”

Physics Today, the flagship publication of The American Institute of Physics, is the most influential and closely followed physics magazine in the world, informing readers about science and its place in the world with authoritative features, full news coverage and analysis, and fresh perspectives on technological advances and ground-breaking research.

Physics Today Online serves as Physics Today's home on the internet, presenting the magazine's digital edition and continually building a valuable online archive. In addition, PTOL extends the magazine's coverage of the physical sciences with the daily edition, unique online content from its editors, and contributors.

The Eck Institute for Global Health is a university-wide enterprise that recognizes health as a fundamental human right and endeavors to promote research, training and service to advance health standards for all people, especially people in low and middle-income countries, who are disproportionately impacted by preventable diseases.