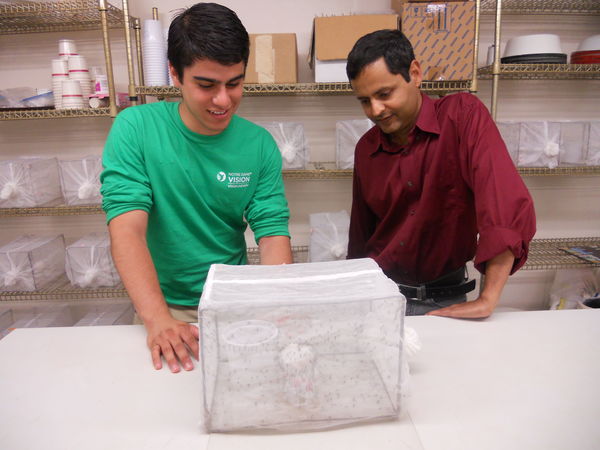 Olaf Rodriguez hit the ground running when he arrived at Notre Dame in the Fall of 2011.  Coming to Notre Dame and being part of the Multicultural Student Program and Service’s Building Bridges Program launched him toward unique opportunities. Though Rodriguez already had a passion for research when he arrived on campus, it was meeting Eck Institute for Global Health faculty member Susanta K. Behura, Research Assistant Professor in the Department of Biological Sciences, that made the doors of opportunity open wide.

Even Rodriguez was surprised at the speed with which his research career launched. Within one year he and mentor Behura published an article in the journal Infection, Genetics and Evolution.  Behura recalls, “He (Rodriguez) works in a systematic manner towards achieving research goals. At the same time, he is fast and efficient. He has a natural talent in the lab and a keen sense of process toward our shared expected outcomes. So it was easy and we just clicked.”

Rodriguez, a Biological Sciences major in Notre Dame’s Class of 2014, was actually the leading author of the manuscript. Behura served as the principal investigator and corresponding author of the paper titled, “Translational Selection of Genes Coding for Perfectly Conserved vectors” in the June issue of Infection, Genetics and Evolution. Rodriguez came to Notre Dame from McAllen, TX, a small town in the far south of the state on the boarder of Mexico.  In the process of coming to Notre Dame, he applied as Biology major knowing he wanted to work with diseases and their vectors. Rodriguez started to explore genomics applications in diseases and disease causing vectors. This academic inquiry brought him to Behura whose research is in the area of vector competence of Aedes mosquitos to dengue virus, which was more in line with Rodriguez’s love for statistical and bioinformatics applications.

Together, they looked at the translational efficiency of genes among three important mosquito vector species: Aedes aegypti (vector of dengue virus), Anopheles gambiae (vector of malaria) and Culex quinquefasciatus (vector of lymphatic filariasis and West Nile Virus). “Although we found several genes, these specific genes encode exactly the same proteins in all three mosquitoes, usage of synonymous codons was exceptionally biased among the orthologous genes,” says Rodriguez. Based on simulation studies of coding sequences of these genes, the paper reports that, “genes coding for perfectly conserved proteins are highly biased with optimized codons and may be under stringent translational selection in these vector species.” The paper was co-authored by Brajendra K. Singh, post-doctoral candidate in the laboratory of professor Edwin Michael and David W. Severson, Director of the Eck Institute for Global Health; all of whom are in the Department of Biological Sciences at Notre Dame.

Rodriguez is well on his way toward his goal of entering an MD/PhD program with is current major, and also carries a minor in Theology. His involvement in Notre Dame’s Building Bridges program was exactly what he needed to fast track his research, resources, and abilities when he arrived last Fall. “I knew where I wanted to go.” Stated Rodriguez, “The Building Bridges Program and professor Behura gave me the “map” on campus and opened doors I didn’t know were there.”

Eck Institute for Global Health’s Susanta Behura was one of ninety-eight Notre Dame Faculty members who worked with the 2011 cohort of students in the Building Bridges Mentoring Program. Through the mentorship of Notre Dame’s faculty, the Building Bridges Mentoring Program assists the University’s underrepresented student population to succeed academically as young scholars in one of the nation’s premier educational institutions. Behura has been serving as a faculty mentor of the program since 2008. “Eck Institute provides great opportunities for Notre Dame undergraduate students in wide verities of researches relating to global health. As faculty members, our aim is to train these young students to be creative and productive in health related research and education”, says Behura.