Notre Dame alumnus Tom Burkot, PhD, a leader in global disease research, delivered the 2015 George B. Craig, Jr. Memorial Lecture titled George B. Craig, Jr., Notre Dame, and the Fight to Eradicate Malaria to a packed crowd on Friday, September 18. Burkot, a 1976 graduate of Notre Dame, has been at the Australian Institute of Tropical Health and Medicine at James Cook University since 2011. His research in mosquito control has included many projects with fellow Notre Dame alumni including Ned Walker at Michigan State University and Bill Hawley with the Centers for Disease Control and Prevention stationed in Atlanta. Burkot also works closely with Notre Dame faculty members Neil Lobo and Frank Collins. 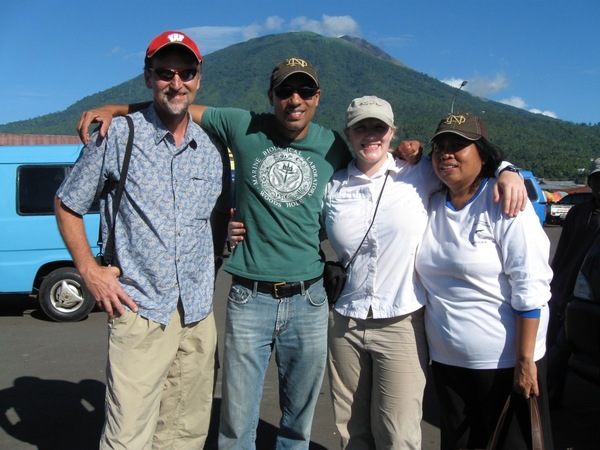 Burkot gave a brief and thorough history of global malaria elimination efforts including the rise and fall of the disease from the 1950s to current day.  Notre Dame faculty and alumni, most specifically those associated with the work of the late George B. Craig, Jr., have served in pivotal intervention and decision-making roles in the elimination effort for over 60 years. In 2007, Bill Gates challenged the world, once more, to eradicate malaria.  Once again, the malaria map is shrinking with Notre Dame faculty and alumni playing significant roles in research, implementation, and policy development.

Burkot's career has focused on improving how the insect vectors of human diseases, particularly malaria, are monitored and controlled. His team conducts basic research on the ecology and biology of the malaria vectors in the Solomon Islands in partnership with the national malaria control program. In addition, the team is evaluating a novel intervention to control malaria.  Burkot also orchestrates the work of 8 institutions and universities in the USA and Europe that form the Vector Borne Diseases Network (VecNet), which is creating an analytical framework for the analyses of the effectiveness of vector control strategies by creating a digital library in which all known data on malaria is assembled together with the means to parameterize multiple mathematical models with the data in the library; VecNet is currently housed at Notre Dame.

“It is an honor to be able to bring alumni back to campus that are products of the University and global leaders in their field,” says Katherine Taylor, Associate Director of the Eck Institute for Global Health at Notre Dame. “Not only is this an opportunity for our students to understand the legacy of global health research at Notre Dame, it is an opportunity for faculty to have direct access to fellow researchers. This gives us an opportunity to strengthen research partnerships going forward.”

Burkot did his undergraduate research at Notre Dame with Craig from 1974-1976 before working on his Masters of Science and PhD at the University of Wisconsin.

Prior to joining James Cook University, Burkot was a research entomologist for the Centers for Disease Control and Prevention where he worked on the President’s Malaria Initiative in Ethiopia and Angola.   Burkot began his career in malaria at the Walter Reed Army Institute of Research as a Medical Research Council fellow and subsequently worked at the Papua New Guinea Institute of Medical Research and the Queensland Institute of Medical Research and later served as a consultant based in the Solomon Islands and Vanuatu for the AusAID funded Pacific Regional Vector Borne Diseases Control Programme.  Burkot has served on the Global Fund’s Technical Review Panel and helped write the Global Malaria Programme’s "Global Malaria Strategy 2016-2030" which was recently endorsed by the World Health Assembly.  He presently sits on the WHO Vector Control Advisory Group, WHO Malaria Policy Advisory Committee, and is a member of the committee presently writing the Operational Manual for malaria elimination for the WHO.

The George B. Craig, Jr. Memorial Lecture, established in 2004 and hosted by the Eck Institute for Global Health, brings to campus former students of Craig who was one of Notre Dame’s most revered and distinguished faculty members.  A Chicago native, Craig joined the Notre Dame Biology faculty in 1957 after receiving a Bachelor’s degree from Indiana University and Master’s and PhD degrees from the University of Illinois.  While at Notre Dame, he established a world-renowned research program in mosquito biology and genetics known as the Vector Biology Laboratory, serving as advisor to 40 graduate students and 39 postdoctoral fellows, with whom he published more than 500 scientific papers.  He was a passionate teacher and mentor to countless undergraduate students. Recipient of numerous awards and honors during his career at Notre Dame, he was honored by the Entomological Society of America in 1975 with its first Distinguished Teaching Award, received the Hoogstral Medal from the American Committee for Medical Entomology of the American Society of Tropical Medicine and Hygiene, and, in 1983, became the first, and still only, Notre Dame faculty member to be elected to the prestigious National Academy of Sciences. Craig’s work is legendary and this lectureship is a testament to his life long investment in his students. This lectureship is funded, in part, by an endowment established from contributions donated in his memory.