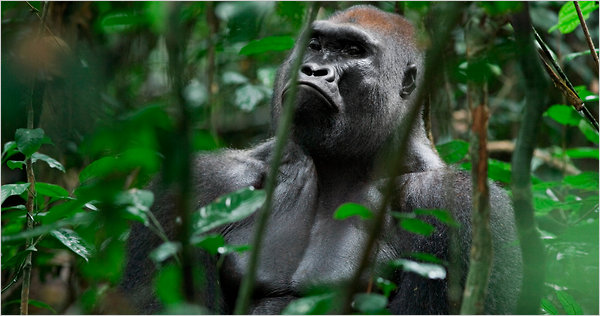 It has taken 10 years for Dr. Beatrice H. Hahn to build the world’s most comprehensive treasury of great ape dung samples.

And now it has yielded an unexpected gem: The most dangerous form of malaria originated in gorillas, not chimps, as had long been believed.

In and of itself, knowing that does nothing to help defeat malaria. But malaria experts were pleased to learn it — and it shows what wonders can be performed when you have 2,700 fecal samples in your freezers and a little imagination.

Dr. Hahn, a virologist at the University of Alabama at Birmingham, is an expert not in malaria but in S.I.V., or simian immunodeficiency virus, the precursor to the virus that causes AIDS in humans. But she has made deals with primate researchers all across Africa who collect fecal samples for their own projects, to have them take extras for her.

They go into vials with a special solution, called RNAlater, that preserves the nucleic acids of all the cells in the sample — which includes not only what apes eat, but cells sloughed off their gut linings, which contain all the things infecting them. She has systematically sequenced the genes of many of those infective agents: S.I.V., simian foamy virus, hepatitis and now malaria parasites.

Her study was published Thursday in Nature.

Knowing that gorillas are the source is not going to lead to a new drug, but it is reassuring in one important way, said Frank Collins, a malaria expert at the University of Notre Dame. The human disease probably came from a mutant parasite that crossed over from a single gorilla thousands of years ago. That implies that if malaria is ever wiped out in humans, it is unlikely that it will ever be reintroduced from apes.

Reintroduction is not an idle threat. In 1932, the Rockefeller Foundation gave up on its 17-year campaign to eradicate yellow fever. Its scientists had realized that monkeys carried the same virus, so it would never be wiped out without wiping out monkeys, too.

Chimpanzees across Africa had various malaria parasites; bonobos, their closest relatives, did not. West African gorillas were infected, but East African ones were not. (The populations are kept separate by wide rivers like the Congo and by humans who chop down their jungle habitats and hunt them.)

Until recently, it had been believed that the falciparum strain of malaria — the most deadly kind, which can kill in 48 hours — came from chimpanzees, because the closest relative to it that had been found, the reichenowi strain, was common in chimps.

But previous surveys of ape malaria — which go back as far as 1907 — have had obvious flaws, several malariologists said. Most sampled only a few apes, who were usually in captivity or in ape sanctuaries close to humans. One bonobo in one previous study, Dr. Hahn said, had parasites that not only were identical to human strains, but showed resistance to malaria drugs — which meant the bonobo must have caught them from a nearby human, not the other way around.

With the exception of 28 samples from a gorilla troupe habituated to humans, “all my samples are from the forest floor,” she said.

One researcher who sends her samples is David B. Morgan, a primatologist at Lincoln Park Zoo in Chicago and for the Wildlife Conservation Society based at the Bronx Zoo, who studies gorillas and chimpanzees in the Goualougo Triangle of the Congo Republic. Dr. Morgan uses fecal samples to track hormone levels, parasites and even family relationships.

He does not try to get blood samples with “biopsy darts” or capture or tranquilize apes for study.

“We want to have as little impact on them as possible,” he said. (Primatologists now frown on the friendly banana-sharing that so endeared Jane Goodall to readers of National Geographic decades ago.) He and his local trackers stay at least 35 feet from troupes they watch. They are vaccinated against diseases that apes can catch, take deworming pills and even defecate in bags that they carry back to camp so as not to risk infecting apes with human parasites, which has happened at other sites, he said.

With colobus monkeys, who rain feces down from 70 feet up in the forest canopy, finding samples “means keeping your head up and your neck bent to spot them, so it can be painful,” Dr. Locatelli said.

With chimps and gorillas, she said, you follow them until they start building nests for the night, take a GPS point, go back to camp, get a few hours of sleep, and then come back early in the morning to look for samples, which are usually in or near the nest. With luck, the nest also has a few stray hairs, useful for DNA analysis.

Explaining her job to local officials is not easy either, she added.

Seven years ago, she said, when she was negotiating for permission to track bonobos in the Congo, she tried to explain what she wanted by showing park officials a vial of gel used for drying samples.

“It had these tiny blue beads in it,” she said. “People thought I was smuggling diamonds. They just would not believe me. They were saying ‘Why would this tiny woman come so far to collect bonobo poop?’ ”